HAPPY HALLOWEEN! How to avoid buying a haunted house unexpectedly.

Let's face it, we live on a planet that's billions of years old, with billions of souls who have walked this earth and have already passed on. The probability of buying a house with a (or more than one) extra spirit roommates is pretty high. Keep in mind there are two different hauntings; intelligent and residual. If you see a spirit re-enacting the same thing over and over and completely ignores you, its simply an energetic replay or a residual haunting. These spirits are caught in a loop and are harmless. The intelligent ones are self-explanatory, they can intelligently interact with you and its environment. Good spirits are awesome to have in your home and you obviously don't want any negative ones. Always follow your feelings when you buy a house. Constant cold spots are dead giveaways. Always keep some sage or something to spiritually cleanse your home. Now here is some advice on how to avoid buying a haunted home unexpectedly. 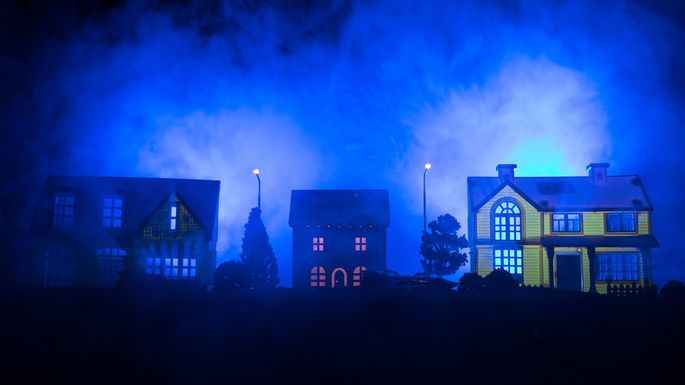 Footsteps late at night. Music randomly playing. Lights flickering. Unexplained shadows. True-horror fans might get a thrill out of moving into a house with a haunted past, but others might see it as a nightmare.

It wouldn't surprise us to hear that notorious homes like the Manson murder house in Los Feliz or the "In Cold Blood" house have experienced some paranormal activity. The same goes for homes in towns with notoriously gruesome histories, like Salem, MA, where about two dozen people accused of witchcraft were executed or died in jail in the 1600s.

“Salem is one of the markets where I practice real estate, and you never know what's lurking behind closed doors,” says Dana Bull, real estate agent at Sagan Harborside Sotheby's International Realty in Marblehead, MA.

At this point, your eyes may be rolling, especially if you don't believe in ghosts. But bear with us. Because there's no way of knowing exactly what has gone on during a house's history—and what may still linger.

“Sellers may or may not be aware of ghosts or other strange, paranormal activities, and almost none of the real estate listing contracts have any clauses or questions about such things. Add to that the fact that the majority of potential buyers don't believe in the paranormal,” says Jane Phillips, a psychic, medium, and paranormal investigator for Geyser Energy Clearing Services, in Santa Fe, NM.

Therefore, in the spirit of Halloween, we beseech you to suspend your disbelief and take the following precautionary steps to avoid buying a haunted house. Because after staying up for a late-night viewing of "The Amityville Horror," you want to be able to fall asleep with no fear whatsoever of poltergeists in your own home.

So whether you believe in ghosts or not (or only in the wee hours), here’s how to cover your bases. It's better to be safe than sorry, right?

The rules on what sellers have to disclose to buyers vary by state—and sometimes even by city. Sometimes you'll receive the full picture about a house's history, but there's also chance you could be left in the dark.

"In many states, it's not mandatory to disclose a stigma like a murder, suicide, or crime—or paranormal activity. You can check with a real estate attorney in your state for the rules," she says.

California, for example, has a law that requires deaths that occurred on the property within the past three years be disclosed.

New Mexico is one state that doesn't disclose any nonmaterial facts about a property when it's listed for sale, Phillips says. That can be tricky for both the agent and buyer, especially if the seller doesn't reveal some facts that could cause a haunting.

Good old-fashioned research can usually turn up information on a house.

“Always Google the address before you purchase a home. You might be surprised by what pops up,” says Bull.

Look at newspaper clippings and historical records to see if any deaths happened at that house that you should be aware of.

Also, research the land the house was built on—does it sit on a former battlefield or an ancient burial ground? (Remember "Poltergeist"?)

“In New Mexico we have a lot of trapped Native American energies on or near properties that need to be moved on,” says Phillips.

Another option is to check DiedInHouse.com, an online resource that allows users access to the death records of specific addresses.

Neighbors usually have the 411 on all things going on in the neighborhood, and that likely includes any rumors about a local haunted house.

If you see any neighbors out walking their dog or raking leaves, try striking up a conversation with them, particularly those who have lived in the neighborhood for a while.

“Not surprisingly, some sellers may be tight-lipped about paranormal activity, so you want to talk to the neighbors,” says Bull.

Check the buy, sell, and repair history of the house

Another tidbit of information that may reveal some interesting clues about the house’s past is in its buy and sell history. Did the house lose value? Does it have a history of being bought and sold several times over the years? That could mean there's something uncanny about the house that keeps people from settling in.

“If it's something you are nervous about, ask! Sellers and their representatives are required to disclose what they know when asked a pointed question,” says Bull.

Phillips says to also look into whether there has been an unusual amount of repairs on the property in the past few years, which could indicate paranormal activity.

“I've cleared houses simply because the owners have had three broken water heaters in one year, or because their list of repairs was never-ending,” says Phillips.

Call in the ghostbusters

Want to be extra, extra sure your potential future home isn't inhabited by a ghostly presence? Call in the professionals. A medium or paranormal investigator can perform services that are aimed at clearing the house of uninvited guests.

“I recommend that anyone purchasing a new residence hire a professional to do paranormal energy clearing before moving into space," Phillips says. "We arrange for the physical cleaning of our homes, and it's good practice to also clear the energetics."

November 12, 2020 | by Tyler Robert | Konami Entertainment has teamed up with award-winning prosthetics company Open Bionic to create something truly unique from Metal Gear Solid. Just like something

PROP 14 - NO The state created its own stem cell agency in 2006 because the federal government placed a ban on federal funding of stem cell research. That agency is called the California Institute for